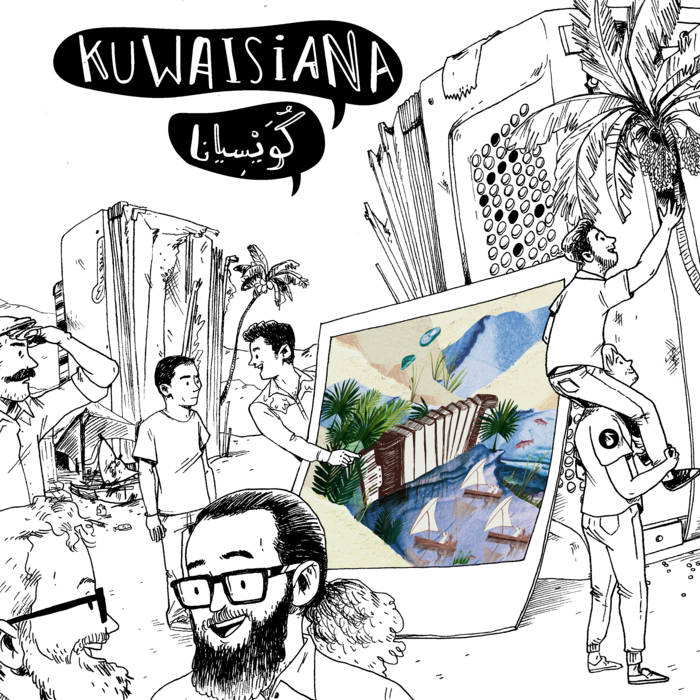 Listen to the full tracks on your streaming service of choice: bit.ly/kuwaisiana_chap1

The Future is Multilingual. This is the debut work of Kuwaisiana, a full-bodied indie rock band with a world music influence. Head over to your streaming service of choice to listen to the album in its entirety.

With songs in Arabic and English, KUWAISIANA is a 7-piece is led by Kuwaiti songwriter +Aziz, who works to produce a danceable, big band-inspired sound. Chapter 1 is split into an A(rabic) Side and English side. It offers 9 dynamic songs reflecting a dedication to unearthing an exciting global sound.

We're taking our first steps at a time when the Arabic language faces serious challenges. On the one hand, America’s xenophobia has kicked into high gear. On the other side of the world, a new generation of kids growing up in the Middle East struggles to speak its mother tongue.

Lyrically, +Aziz works to explore dysfunctions found in the cultures he knows so well. Blurring the lines between personal and imagined experiences, his metaphor-rich lyrics sustain a tension between conversational and a more evocative, poetic perspective.

Give it a spin and we look forward to your thoughts and reflections on the work!

John “Soltrane” McCloskey has been playing bass since the age of 14. He started playing shows since the age of 16 when he moved to New Orleans in Late 2007; John was also a student at the Victor Wooten bass camp that same year. John enjoys soul food and obscure sound equipment. John is also an expert in making grilled cheese sandwiches; his favorite cheese blend for said sandwiches is Jarlsberg and Irish Sharp Cheddar. John hopes to one day collaborate with Jonwayne and John Travolta in a project he has dubbed as Tron Javolta.

Michael Stalios' roots in New Orleans go back to the 1990's, where he cut his teeth as a guitar and bass player for local live acts. A move to Brooklyn, NY in 2005 led him to create, perform and tour with several indie rock and punk outfits for which he also produced a variety of projects. A recent return to the Big Easy inspired a dedication to improving his piano chops and provided a serendipitous meeting with Kuwaisiana. His dual role as the band's record producer and soft synth man allow him to indulge both his love of live performance and his commitment to capturing enduring studio sounds.

Patrick Driscoll Drummer Patrick Driscoll has over 16 years of experience in the world of percussive arts. He cut his teeth with Chicago bands Get up with the Get Downs, Videobug, and Dust Bunnies. Upon recently moving to the beautiful city of New Orleans, he has been privileged to play with KUWAISIANA and 2nd Chance Brass Band. He is also an educator, teaching young children the basics of brass band music as part of an after-school program for the Art Klub. His performance hijinx over the years have led him to open up for Ivan Neville's Dumpstaphunk, Youngblood Brass Band, The Diplomats of Solid Sound, and Low Cut Connie. It should be noted he is also an ardent lover of cats.

Dehan Elçin hails from Istanbul, Turkey where he was born and raised. He started his musical journey with piano when he was three years old and a few years later he started studying classical piano part-time at the Istanbul Conservatory. He picked up the trumpet in middle school and it has been his primary instrument since. During high school he became very interested in jazz and attended the Bahcesehir University certificate program. Upon graduating high school, Dehan wanted to be closer to the roots of the musical idiom he wanted to study and chose to move to New Orleans to attend Tulane University. He recently graduated from Tulane University where he had been studying under the guidance of Jesse McBride and Jim Markway. Kuwaisiana's vision of bringing different musical idioms together excites him a lot, as he wants to connect his Middle Eastern musical roots with the music of the Big Easy. Currently, he is also a part of the Next Generation Band and EMCM Jazz Orchestra.

+Aziz grew up between Kuwait and the U.S. After the Gulf War, his family relocated to UAE and then to America. He moved back to Kuwait in 1994 to finish off middle school & high school in Mishref, Kuwait. He then attended university at Penn State and then University of Illinois, studying advertising and philosophy.

After graduating in 2008, he moved back to Kuwait where he started his careers in advertising and music and ended up befriending a fresh crop of the Millennial Creative Class, including Basil Al-Hadi (aka DJ Karrouhat).

In 2009, he relocated to New York City and worked as a brand strategist and trend spotter for companies like PSFK, Edelman PR and FATHOM+HATCH. After completing a crowdfunding effort and recording a solo EP titled Soho Spirit, he moved out to New Orleans in 2014 to further develop his musical profile and develop his band, Kuwaisiana.

Bandcamp Daily  your guide to the world of Bandcamp

Khruangbin and Greg Foat stop by with their amazing new LPs.